It was not obvious in which orientation this card had to be held; in fact, it need to be viewed horizontally to be interpreted most easily. This was an unintentional ambiguity, only realised once the cards had been dispatched and which added slightly to the difficulty.

Each six-by-six grid of squares represented the letters of the alphabet and the digits, and the main puzzle was to discover the positions of these. To render a plausible message, they needed to have the alphabet followed by the digits, starting from the top-left corner and spiralling clockwise and inwards:

The tracks then showed the words represented by each grid. 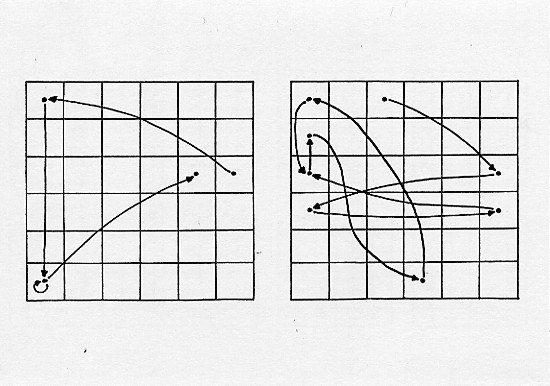 This translates as: Happy Christmas 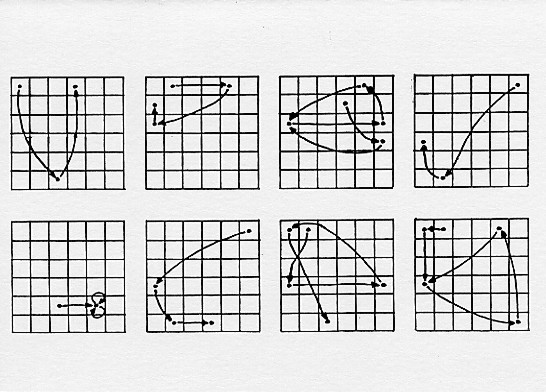 This translates as: and best wishes for 2000 from Brian Barker

It is perhaps interesting that this method of indicating words of a message can be ambiguous. If, for example, there are more than two instances of a particular character in a word where the strings separating pairs of instances are not identical, then it becomes unclear in which order loops in the track should be traversed and the track thus becomes ambiguous. In addition, even single loops render it necessary to guess which of two possible routes should be traversed first, although the correct one can be discovered heuristically. If the starting and finishing points are themselves within a loop, their locations can also be ambiguous. Examples of ambiguous tracks are those for ABCADB and ADBACB, and for ABA and BAB.

Observant recipients (of those receiving their cards by post) will have noticed the Irish stamp and air mail label and (if they could decipher the Gaelic version of its name) the Dublin postmark on these cards. I hadn’t emigrated; rather I took advantage of some silly air fares to spend a couple of days in Dublin and happened to post the cards there.