This year, the puzzle of choice seemed to be the sudoku, and I adapted it for this year’s card. Whilst a sudoku is normally expressed as a number puzzle (as its name strictly requires) the digits used have no numerical significance, being just a set of nine distinguishable characters. In this version, the characters were letters, and the solution created the required message along the horizontal central line of four puzzles, which was shaded as a clue.

The first problem this created was the existence of repeated characters in parts of the message, e.g. the two Ss in “Christmas”. My first thought as a solution was to use an old-fashioned font, such that the first “s” would be the former “long s” and the final one a conventional “s”. But this proved problematic, and wouldn’t anyway have solved other duplications, such as the two Ps in “Happy”. The next thought was to print different occurrences of the same letter in different fonts or styles, but this would have rendered solution of the puzzle more difficult, requiring the solver reliably to imitate those font or style differences. A simple solution was to underline one character from any duplication; there was no significance in this underlining, of course, except to distinguish the separate occurrences. Spaces between words could not be left as spaces in the puzzle, as they would then be indistinguishable from the empty squares to be completed by the solver – so meaningless symbols were employed as place holders.

I cheated slightly by using the same puzzle four times over in the card, but rang the changes by reflecting the pattern both ways to produce four variants. All four had the interesting property that the horizontal central line was empty of clues in the puzzle, so no part of the message actually appeared on the card. All four puzzles were similarly of an easy standard. What made them in one sense even easier was that it was possible to deduce the message line unambiguously whilst leaving significant areas of the puzzles unsolved. 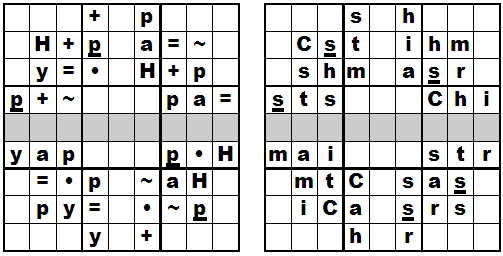 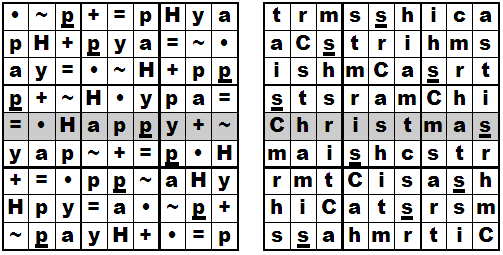 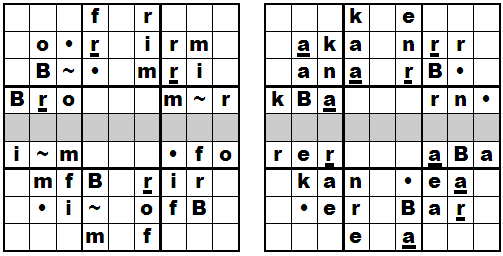 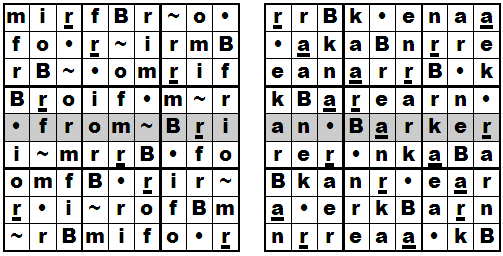