This year’s card is formed of country code top-level internet domains, derived from ISO 3166-1: “Codes for the representation of names of countries and their subdivisions – Part 1: Country codes”. Its “alpha-2” two-letter country codes are used, with a few exceptions, for internet country code top-level domains. Each domain code represents the initial letter of the name of its country or region in its accepted form used in the English language. So “uk” (meaning “.uk”), for example, would represent United Kingdom and thus the letter U (not needed here, as it happens).

To make the puzzle non-trivial, I had to include many examples of the minority of cases where the domain code does not start with the same letter as the country name. 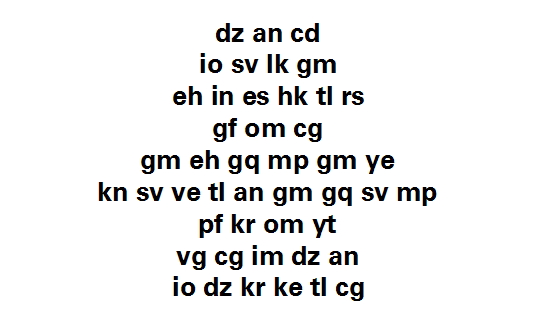 AND BEST WISHES FOR TWENTY SEVENTEEN FROM BRIAN BARKER

There was no way to represent punctuation using this code, so I couldn’t manage the appropriate hyphen in “twenty-seventeen”.